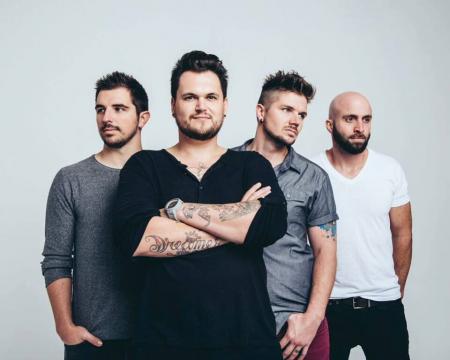 7eventh Time Down does not have any upcoming events.

The best songs are those that are heard when we need them most—the ones that become lifelines of truth in the midst of uncertainty. Enter “Just Say Jesus,” the powerful title track and lead single from 7eventh Time Down’s sophomore album.

A little boy hears the song after losing a friend in a biking accident and asks his mom if it was written about the tragedy. A mother and father mourn the one-year anniversary of the death of their daughters, and the song helps them through the tear-filled day. A grown man who lost his father is comforted by the song in the wake of childhood memories.

“It’s way bigger than we are as a band. It’s way bigger than we could’ve hoped for because God’s using it,” offers lead singer Mikey Howard of the single’s resonance. The constant stream of stories from fans remind all four band members—Howard (lead vocals, rhythm guitar), Cliff Williams (bass), Eric Van Zant (lead guitar) and Austin Miller (drums)—of the power of a song to impact lives. For the Kentucky-bred foursome who grew up playing music together, it’s a privilege to get to steward this song, as well as the others on their new release.

Their second full-length project on BEC Recordings finds the band sharing some narratives of their own on Just Say Jesus. “There’s a story told in each song,” Williams explains. “We write about living and what inspires us because Christians are real people. As believers, God will inspire you. It’s going to be the biggest part of who you are. That doesn’t mean at times you’re not going to write a song that’s reflective of who you used to be. We’re just southern dudes who’ve got dirty pasts just like all the other people who have come to know God.”

The longtime friends are quick to admit that while brokenness is a part of every believer’s life, it’s important to not remain in a place of guilt and shame. The band isn’t interested in pity parties. Instead, they choose to celebrate redemption through their music. “We only touch on a little bit of the brokenness because we feel like that part of our story is the smallest part,” Howard shares. “We focus on what God has done in us through His son Jesus and the cross… We quickly get to the bigger part of the story, the resurrection part, and that’s what our focus is as a ministry—life, resurrection, joy.”

While every bit as loud and hook-laden as their 2011 debut, Just Say Jesus is a more aggressive, focused and cohesive effort. All four members co-wrote the majority of the 10 tracks, while also lyrically collaborating with respected songwriters Ian Eskelin, Jeff Pardo and Tony Wood. Eskelin (Stellar Kart, Hawk Nelson) produced two of the tracks, while Howard produced the additional eight—a daunting, yet rewarding task for the front man. “It was a great experience. I learned so much,” Howard says. “I had [some producer friends] on speed dial, and if I had questions, I would call them, and they just really sewed into me as a producer and as a writer and just helped me hone in on the craft.”

Ironically, the majority of the album was cut in Howard’s basement studio in Mount Vernon, Ky., the same basement of his childhood home where the band recorded their first song when they were young teens.

Songs like the anthemic “Hurricanes,” the blazing “Renegade” and the iconic “Religious and Famous” provide a sonic assault to the senses, while lyrically radiating a clear message of truth. Miller hopes listeners will find their voice amidst the songs. “As Christians, a lot of times, we get caught up in how to word [our] prayers,” he says, “or you feel like you have to be really philosophical in everything you do, but in reality the Gospel’s simple, and it’s true.”

The second time around, every note and lyric is etched with intentionality. The up-tempo “One I’m Running To” harbors a melody line that sets the pace of racing toward God as the title implies. “This song is about those moments where you have a really big choice to let the weight of life totally crush you...or in spite of that, in that moment making the choice to run toward Christ as fast as you can because you know He’s the only way out, those moments when we choose Christ above all else,” Howard reflects.

For 7eventh Time Down, every song is an opportunity for ministry. The band has toured with a long list of impressive artists, including Newsboys, for King & Country, KJ-52, Manafest, Fireflight and Stellar Kart, among others, and was recently a featured artist on Air 1’s popular “Club Awesome Tour.” Logging nearly 100 shows a year, the band members are true road warriors, carrying full production for their live shows since their earliest days together, handling everything from sound and lighting to stage set-up themselves.

In an effort to expand their ministry beyond their music, the band partners with CURE International, a non-profit that operates hospitals and programs in 27 countries worldwide where patients receive surgical treatment and have the opportunity to hear the Gospel. During the “Club Awesome Tour” alone, more than 38 surgeries were funded.

“It’s literally what Jesus did. He showed up in town; He taught them, and then He healed the sick. He healed them and they received Christ,” Williams observes. “That’s what’s happening with CURE International. They’re going and performing surgeries, healing afflictions and sharing the love of God.”

Whether it’s through a radio single, a tour or their work with CURE International, 7eventh Time Down desires to carry the banner that the God they serve is bigger than any circumstance, any hurt or any music career. Howard aptly sums up the heart of their message as a band: “We just want to gently remind people that no matter what kind of junk you’re carrying around, Jesus is enough.”