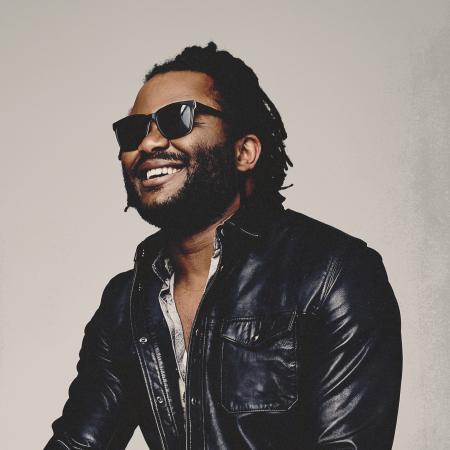 Sometimes all it takes is five minutes with someone to know they’re special. Spending an additional five with Blessing Offor reveals something more. Born with glaucoma in his left eye and losing complete sight by age 10, Blessing has not let his hardships deter him from becoming one of the most sought-after talents in Music City. Blessing’s music prompts joy that encourages a sense of contentment with thought provoking lyrics that elicit a second listen. His inviting voice draws you in like a familiar friend and Blessing proves that by being who he is, he is indeed innately special. After years of honing his craft and finding his voice, the Nigerian-born, Nashville based singer/songwriter is now poised to share his thoughtfully crafted pop instincts and unique perspective with the world.

The youngest of six, Blessing immigrated from Nigeria to the U.S. with his uncle at the age of six. Blessing’s parents selflessly sent their son to America in the hope that he’d be able to receive medical care for his glaucoma. Several years later, a powerful spray from a water gun damaged his retina, removing the sight in his right eye, just as he was starting to learn piano. Yet, the disability did not deter him. When other kids went out to play ball, Blessing found himself behind the ivories obsessing over Stevie Wonder’s “Ribbon in the Sky,” realizing that music would forever be a part of his story.

Blessing doesn’t believe his blindness is a hindrance; rather, a gift that affords him a heightened sense of attunement to the world around him. Losing his sight gave him a greater appreciation for sound and its multitude of textures and timbres. He began hearing every note of a chord, making his creating experience even richer.

In his formative years, Blessing grew up in Connecticut on a steady diet of pop, Motown and jazz, and as a teenager, discovered his talent for writing songs. In turn, Blessing found something of a calling which took him to Belmont University in Nashville. “I didn’t want to go somewhere where it would be easy to go home if I got scared,” he admits. “I wanted to go somewhere that would make quitting hard to do.”

Though far from home, Blessing soon found that his pithy pop hooks were a square peg in a round hole in a Nashville that had yet to experience the musical diversity it holds in high regard today. So, Blessing packed his bags and headed for the Big Apple, where he spent the next five years cultivating his songwriting and musicianship before heading back to Music City in the summer of 2015.

“During the five years I was gone, Nashville musically progressed. Taylor Swift became a global superstar, and Nashville’s musical identity was changing,” he says. “The city and the industry had changed; and honestly, I knew I could do a lot of learning and working there, even if I was the guy doing ‘pop singer/songwriter’ music in a mainly country town. I was just going to embrace doing the different thing.” Blessing has been doing so ever since – paving his own way, all while spreading a contagious, rare joy that only he seems to possess. He moves expertly between the multitude of the human experience, making life more relatable and understanding to listeners beyond genre.

That mindset is displayed tenfold on his track “Brighter Days” – a piano laden, percussive, up-tempo track about life, love, and finding the beauty in darker moments. Blessing sings in the refrain, “I swear that love will find you in your pain / I feel it in me like the beating of life in my veins / I know there’s gonna be some brighter days.” These are words spoken not just to accompany a hooky melody, but from deep experience by a person who has taken the hardships of life with poise and grace.

“As I got older, I started to realize that everybody’s dealing with something crippling. We’re all somehow falling short. If you could picture anybody you deal with being in an emotional or mental full body cast, you’d have a lot more grace for people,” he asserts. “I actually feel bad for people who have yet to discover what they’re struggling with because no one cuts them a break, and that’s really sad.”

When asked how he reconciles his blindness with his faith, he asks, “Is God only good when things are awesome? Because surely the answer can’t be ‘yes’. Why should we expect that nothing bad should ever happen to us? Am I the only one dealing with bad things?” he asks. “So that is the road map, so to speak, to kind of understand why it’s OK when bad things happen. My faith and my life are not compartmentalized parts of me. It’s in everything, even when I write love songs. If you’re OK with me being myself, then I’m in; because at the end of the day, I want to be myself.”

His point of view is distinctive. His personality is joyful. His music, however, is far more difficult to classify, and perhaps that’s intentional. The through line is a powerful trifecta: warm, friendly vocals, piano-led melodies, and sincere lyrical depth. Although Blessing hasn’t seen his parents in-person in two decades, the moral barometer they instilled in their son remains an integral part of Blessing’s DNA.

Blessing’s track “Tin Roof,” co-written with Natalie Hemby, shows that his compass is always pointing back to his roots. The shortbread stark performance of solo piano and vocal allow the song’s message to soar, that there is something heavenly about home – a sense of comfort that no material thing can match. No matter the riches that are promised when our work here is done, there is nothing like “rain on a tin roof, washing away my sorrows, giving me faith to follow a new tomorrow.”

“If it’s not something I can play for my dad, I can’t do it,” Blessing claims. He’ll hopefully have the opportunity to play some of his songs from his upcoming EP Brighter Days for his father when he makes his way back to Nigeria—the culmination of a personal documentary he’s working on. His long-awaited homecoming will return a son and brother home to the small village where his best qualities were born: resilience, positivity and faith.