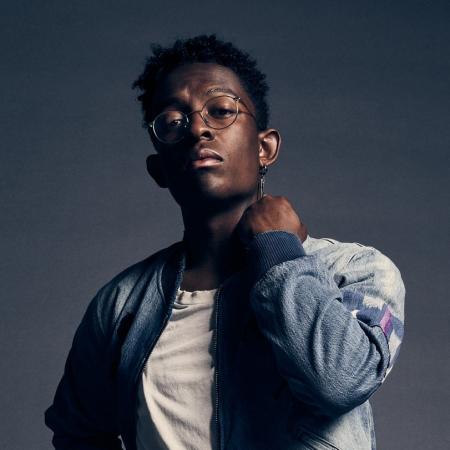 BRELAND is a paradox. The Jersey-born-and-raised, feel-good creative force is perhaps the most unlikely and predestined breakout Country star on today’s horizon, where he defines and defies labels by embracing all kinds of music with an exuberance that’s blinding. Employing a strong wash of modern Pop, the double Georgetown Business/Marketing degree’d music obsessive offers the shimmer of Bruno Mars, the slink of Luther Vandross, Drake or Teddy Pendergrass and a couple handfuls of old school dirt floor Southern Gospel interjected into his positive vibe take on modern living and Country music.

“Joy is a lifestyle and a decision,” explains the PLATINUM-certified artist. “To me, people often mistake happiness for it. But joy comes with purpose; it’s exchanging energy, a driver. Joy’s as contagious as anything; when someone’s walking with it, it rubs off on everyone around them. Music does that, too…”

Whether the Casio-dripping ride-or-die friends anthem “Here For It,” featuring Ingrid Andress, the romping homestyle “County Line” that celebrates his small town life, the bumping celebration of confident woman everywhere “Thick” that shouts out Lizzo, Megan the Stallion and Serena Williams among others, the New Jack sultriness of “Alone At The Ranch” or the slinky, Soul-tinged “Don’t Look At Me” the man Rolling Stone called “a symbol of Country music’s ongoing evolution” blends an intoxicating cocktail that’s equally effervescent and smart.

It also makes Cross Country the perfect title for BRELAND’s Bad Realm Records/Atlantic Records/Warner Music Nashville debut. The spirited songwriter who can namecheck Hemi engines, crispy chicken, “Country Grammar,” East Atlanta, the Rolling Stones and broken cowboy boots connects from the inside out. He strips the best aspects of life – and music – to their essence, then delivers 14 songs that distill a kind of Country that reaches across genre definitions to be wholly new, fresh, alive and his own.

“I’m seeing more and more artists blurring genres, not worrying about what it is,” says the young man who came to Nashville from urban music Mecca Atlanta, GA. “Country music is global, too. C2C in the UK, festivals in Europe, Canada and Australia make it so much bigger. It’s speaking to people from different backgrounds, ideals, who look different but feel the same things.

“For me, I listen to a lot of Stevie Wonder, Glen Campbell, Earth Wind & Fire, Kendrick Lamar, Kacey Musgraves, Drake. The people I collaborate with – Sam Hunt, ERNEST, Keith Urban – they listen like that, too, so it all ends up in my songs.”

BRELAND also believes in depth to his lyrics. A tremendous bit of unadulterated euphoria is balanced by a seriousness and reckoning that creates a sub-arc on his major label debut. With three songs – the luxurious “Told You I Could Drink” (with Lady A), the acoustic stroll and debut Country radio single “For What It’s Worth,” the memory-tinged misdirection “Happy Song” – he explores not just regret, but his part in the break-up.

“It’s a by-product of who I am,” he offers. “The toxic Pop music of the past few years, men and women who don’t really shoulder any responsibility for what happened. But I wanted the sad songs to have a level of accountability. ‘Good For You’ and ‘For What It’s Worth,’ they look at what happened – and what I wish. I’d much rather sing a break-up song from that perspective.”

He opens the subdued acoustic “Good For You” with a list of impressive achievements, owning there’s no equivalent in love. With a fluttering tone that suggests Usher or Prince at their most intimate, BRELAND offers a deeper look at broken hearts. Giving his silky ballads more heft under the hood, he introduces a way of looking at love that’s been missing since Conway Twitty.

That deeper look informs the plucky “Growing Pains,” another self-awareness song that’s as much self-compassion as own where you are, learn the lesson and carry on. A song that looks hard at the falter – “Mama told me days like this will come / and that when they do, don’t let them break your luck…” – and rises stronger and encouraged in the knowing. That same striving, growing and believing infuses the Mickey Guyton duet title track with an authenticity both have lived. Like “Here For It,” the next wave of Country stars recognize the dream in each other, supporting and lifting each other up.

“I’d put ‘Growing Pains’ in there, because it’s a perspective I have on friendship. If I’m going to show up for people, I can’t show up for anyone if I don’t take care of myself. It’s the thing no one tells you, and it’s easy to not realize.”

“I’ve built a network of people who love me the way I want to be loved! They’ll call me out, tell me. When Ingrid and I wrote ‘Here For It,’ I thought it was for her album, then it didn’t make it – and I got to have it. Nobody writes friend songs from that perspective, and that’s what we’re talking about…”

“Mickey, when I first came to town and had ‘My Truck,’ she reached out and said, ‘Whatever you need…’ She’s the real deal when it comes to being someone who shows up and creates community. We’ve only written a couple times, but I wanted her on ‘Cross Country.’ She was eight months pregnant, so she joked, ‘My heart is all over this song…’ But we sent her a version with the open verse for her, then we wrote it – and she sent back that vocal! This is the woman who at the CMT 2021 Awards, when I’d never done an awards show, said, ‘Hey, you should come back out and sing ‘Friendship Train’ with Gladys Knight.’ See what I mean?”

Indeed, BRELAND’s bottomless positivity and creativity draws people to him. Lady A’s Charles Kelley met him at Miranda Lambert’s CMA after-party, said “Give me your number so we can write.” In a world of empty promises, the Lady A singer not only called, Kelley co-wrote “Told You I Could Drink” with BRELAND and his back home from Burlington, NJ, friend Zachary Manno.

“His Dad was Superintendent when my Mom was Vice Principal of the Elementary School, so we grew up faculty kids who fell out of touch. When I called him and said, ‘I’m bringing Charles Kelley over to your apartment — and we’re writing a hit!,’ who knew? But it was a focus track before this was even out.”

That irrepressibility is relentless. Acknowledging the occasional down day – “I had to realize I can’t let my life be ‘Something good happened, I feel great!,’ then ‘Something didn’t happen, and I feel…’ It’s just out of my control” – the more his journey has come together, the more the child of two pastors has come to believe it was meant to be.

“The more things fell into place, all the serendipitous moments… I come from a household of faith. Growing up, my parents told me I was going to do something special. And in the world of every kid gets a trophy, that’s not my parents. I made a decision in November when I was bogged down by music stuff, that I was going to be grateful for everything, whether it feels good or not, whether it was bad or not, even a day off, GRATEFUL!”

“In February of 2020, we had ‘Thick.’ Lady A were cutting their vocals in May of 2022. It was 26 months of creation, 26 months of growing and writing… and trusting. I knew I wanted to make a project that wasn’t preaching, ‘You can do it.’ I have these songs where I am saying, ‘Yeah, you can…’ because I have, that say: Ignore the doubters and people saying, ‘This isn’t how you do it,’ because I have. I don’t really care if it’s not how I’m supposed to do it if I can be faithful to my purpose. That’s every single one who hears this album. I want people to walk away feeling inspired to make their own Cross Country, and you don’t have to make music at all! Whatever you want to pursue or do, don’t give up because of it might be perceived as or what’s supposed to happen. Listen. Dream. Do it.”

BRELAND laughs again, knowing the preacher in his genes is on full display. He’s not apologizing, but acknowledging we all need a little cheerleading, a little honesty and the faith to make the leap. Without creating a manual for doing the unthinkable, he’s created Cross Country as a field guide to jumping.

“Cross Country is more than Country and Hip Hop. It felt like people thought that’s what I am. ‘County Line’ and ‘Throw It Back’ are the only ones that are that, the rest go everywhere, and that’s the idea.”

“If these songs only live in Country, then I didn’t do my job. I want to create something Country listeners and other listeners of Pop or whatever can listen to. We as a society are dealing with a lot of different divisions that only music is going to bring together. Music can bring people from different places, cities, states, ideas together. So, I’m playing with all these different genres to build bridges between Country and R&B, Hip Hop and Gospel, and Pop. The language? The instruments? I’m not sure, but let’s get all those different groups together through music and the songs.”