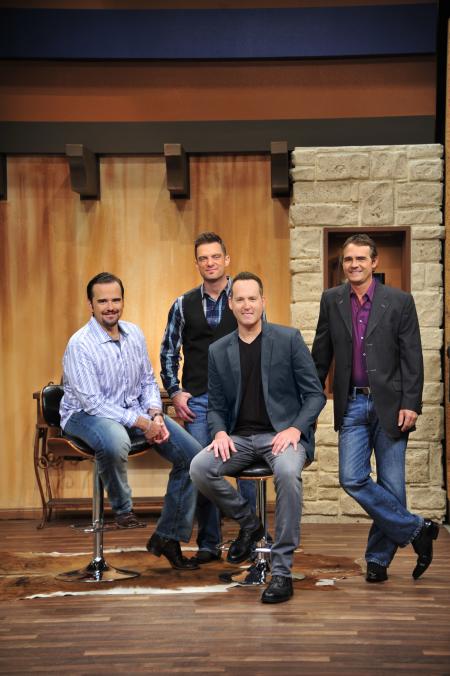 Canton Junction does not have any upcoming events.

Forget everything you thought you knew about quartets, because Canton Junction isn’t your typical quartet. As the name suggests, it is a place where four diverse talents intersect—one an internationally known pastor, one a former bricklayer, one a Grand Ole Opry performer, and one who discovered his calling at a Cathedrals concert—united by their love for music, family, and the desire to proclaim in song what God has done in their lives. With individual resumes including Grammy Award nominations, multiple GMA Dove Awards and Singing News Fan Awards, and citing musical influences from southern gospel to country to Big Band, Canton Junction effortlessly blends traditional and contemporary sounds for a cutting-edge style all its own.

The group’s origins can be traced back to San Antonio’s Cornerstone Church in 2011, when founding members Matthew Hagee, Michael Sykes and Aaron Crabb hastily prepared to sing “At the Cross” during a service, after a last-minute cancellation. The harmony was so effortless, they knew this was no accident. Shortly thereafter, bass singer Tim Duncan joined and a group name was chosen: Canton Junction, which means “when good things come together.”

Since their official debut in 2012, the Texas-based quartet has thrilled audiences across the U.S., Canada, Scotland and Israel with their inspiring message and high-energy performances. The quartet’s debut album, Canton Junction (Difference Media), garnered a GMA Dove Award for Southern Gospel Album of the Year and two chart-topping singles, “Hold On” and “Sweeter as the Days Go By.” The momentum continued with the group being named Favorite Southern Gospel New Traditional Quartet at the 2014 Singing News Fan Awards. Canton Junction has also used its platform to raise awareness and funds for the Dream Center in Los Angeles, to which the members donated proceeds from their recording of the soul-stirring “Back On My Feet Again.”

The group’s talent and passion shine through on their highly anticipated Every Hallelujah, the first recording to feature new members Ryan Seaton (baritone) and Casey Rivers (lead), joining Hagee and Duncan. Well-known to gospel music audiences, Seaton toured with Ernie Haase & Signature Sound from 2003 to 2009, during which time the group received multiple Dove Awards and a Grammy nomination. Pursuing a successful solo career, Seaton’s 2010 album, The Stage Is Bare was recognized with two Dove nominations. A highly acclaimed vocalist in multiple genres, Rivers was a finalist on USA Network’s Nashville Star in 2006 and, as a country solo artist, shared stages with the likes of Loretta Lynn and Kenny Rogers. From 2008 – 2012 Casey served as lead vocalist for southern gospel trio Beyond the Ashes.

Produced by award-winning musician Garry Jones, and featuring powerful new songs alongside well-loved classics, Every Hallelujah is a perfect reflection of both the talent and heart of Canton Junction. The wide array of songs selected for Every Hallelujah showcases the remarkable versatility of this combination of voices, a quality which still takes Hagee by surprise every time they sing together. “Ryan’s traditional quartet stylings and Casey’s contemporary country sound have allowed us to take a fresh approach to who we are as Canton Junction.”

“When people listen to Every Hallelujah, they’re going to be taken on an emotional roller coaster,” enthuses Seaton. “I really think people will relate to these songs.” Rivers adds, “I’d say this collection of songs, including more originals than in the past, puts even more of a stamp on who Canton Junction is.”

Seaton’s soulful baritone shines on “A Place Called Grace,” written by Sue C. Smith and Kenna West. “The line I really love hits home because I think we’ve all been there,” he muses. “You came to me when the sun was shining bright/It’s just so easy to ignore You when all’s well in my life. So many times when things are going well, we think we need Him less. So every time I sing that song, it brings back the truth that no matter where you’re at in your life, you always need Him.”

Kenna West teamed with Jason Cox to write the gentle, country-tinged ballad “For Moments Like These,” which urges believers to trust the Father during circumstances that may be painful or hard to understand: Faith was made for moments like these/ When God knows what you can’t see. Matthew Hagee shares why this song has gripped his heart: “It doesn’t matter who you are or what you are going through, if you don’t understand what God’s doing and you simply say, ‘God, I don’t understand it, but I’m going to choose to believe You anyway,’ then you get the affirmation you need.”

Tim Duncan enjoys the up-tempo “I Need a Little More Jesus,” as well as “God’s Got a Better Plan,” written by legendary southern gospel writer Ronny Hinson. “You may think you have it all planned out, but God’s got a better plan. He sees the big picture,” Duncan explains.

As evidenced through the songs of Every Hallelujah, the hope of each of the members of Canton Junction is to allow God’s Love to permeate not only their own hearts, but to touch everyone who listens to the music. “People can expect to have their hearts lifted,” says Seaton of the group’s live performances, “and I think they’ll leave better off than they came in.” Hagee concludes, “We’re going to do everything we can to give audiences the opportunity to escape whatever is bothering them at that moment and to remind them that God’s still on His throne and everything’s going to be alright. It may be by clapping their hands to a good beat, or it may be in lifting hands in an atmosphere of praise, or it may be just in a simple, quiet moment when a familiar ballad serves as a reminder that God has a great plan for our lives. Our main purpose and goal is to express His love through the music we like to sing.”