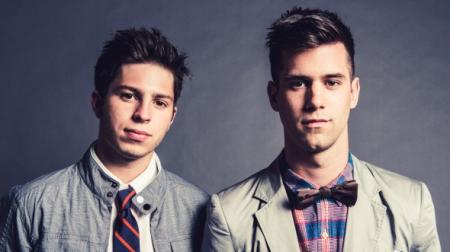 Capital Kings does not have any upcoming events.

There’s no denying much of today’s music has the power to move the masses
physically. Inventive beats and hooky choruses are the currency of the day. Now
enter Capital Kings, a talented duo that blends pop, electronic dance music, and
rap into an intoxicating musical mix that makes audiences want to move, and yet
there’s a thought-provoking, life-affirming undercurrent. Capital Kings combine
style with substance and introduce flash with a foundation.
Engaging audiences seems to come naturally to Jon White and Cole Walowac,
who formed Capital Kings while still living in their native Washington D.C. Jon
and Cole have parlayed a long-term friendship and shared passion for music into
one of the hottest careers in the industry. Despite their young age, the duo’s
history is a lengthy one. “We were in the nursery in the same church,” Jon says.
“We moved away to Massachusetts for a few years, Cole and I met back up in
the same middle school and we started playing in the youth group band. Cole
would play drums and I would sing and that’s how we started making music.”
Influenced by a variety of artists from Maroon 5 to TobyMac, Jon and Cole began
creating their own sound. Both are multi-instrumentalists, and between the two of
them, they play piano, guitar, trumpet, keyboards and drums. "We were really
interested in electronic music and were always fascinated with what DJs were
doing because that was starting to get big when we were in high school,” says
Cole. “We got really into programming, just making beats. We love hip-hop music
as well, so I always made beats and we just decided that one day we’d start
making music that was different than a normal rock band. We just started making
electronic music and beats and it just came together. It was a natural thing.”
The duo began sharing their music and earning the respect of some of their
heroes. “We were even dropping music to Toby, saying, ‘Hey, check out our
music,’” says Jon, recalling how they caught the attention of one of Gotee’s
founding fathers, Toby McKeehan. “We played a bunch of shows in high school
and it gave us a lot of experience. That’s when we first really started getting out
in front of the public. It definitely shaped us into who we are now.”
The two relocated to Franklin, Tennessee, and soon found themselves working
with TobyMac. “Toby said, ‘Hey, I’ve been telling people about you guys and how
you guys can do remixes,’” says Jon. “We did one for him and then all of a
sudden we just kept getting calls. It came out of nowhere. It was a blessing for
sure.”
Since signing with Gotee Records, the duo has gained a reputation as the
industry’s freshest REmix masters, working with some of the top artists in the
industry, including TobyMac (EYE ON IT, Dubbed & Freq'd), Group 1 Crew
(Fearless), Mandisa (Remixed: Get Movin') and Britt Nicole (Gold).
As much as they’ve enjoyed working with other artists, recording their own music
afforded them a whole new level of creative expression. “We have a studio in
Franklin that we use and we basically go in almost everyday and write song after
song after song,” says Jon. “Over the past year we’ve developed a lot.”
“It’s not everyday I get to introduce Christian music fans to a group that exceeds
all expectations, but that’s exactly what Capital Kings is doing,” says Toby
McKeehan, Gotee Records co-founder and CEO. “Already proven studio
remixers and producers, this songwriting duo makes up a new artist that will take
our industry to a new chapter and inspire listeners everywhere. I can’t wait for
people to hear it!”
Aside from creating their own unique wall of sound, Capital Kings have also
earned a coveted slot on the 2012 Winter Jam Tour. They will join Tobymac,
RED, Chris August, Group 1 Crew and label-mate Jamie Grace.
In a perfect storm of entertainment and inspiration, Capital Kings create music
that is definitely fun, but with an underlying current of hope that is absolutely
infectious. “We’re not preachers. We just love singing about real life,” says Jon.
“God is obviously No. 1 in our lives and we base most of our experiences on
finding His hope and His love.”
“We’ve always really like believed in what we are saying. We know the
importance of everything that we do and we’re cool with that,” adds Cole. “That’s
why we were put on the planet. If we can inspire somebody to live life to the
fullest and we can just be a positive influence on other people, I think we’re doing
our job.”