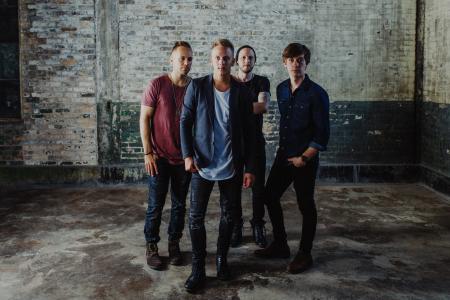 The Color does not have any upcoming events.

Originating from Manitoba, Canada, Jordan Janzen and James Shiels began The Color after a season in life when they thought they were letting go of their music dreams.

“James and I had played in a high school band for a few years and it encompassed all of the high school desires and dreams that come with that.” recalls Jordan. “We were going to be famous! Then, when James moved away to go to Bible college, things just sort of came to and end.”

Following some spiritually transformative years, Jordan and James both entered into full-time ministry in 2009. Jordan as a youth pastor and James a summer camp director.

“It was a bitter sweet time,” James explained. “It was difficult feeling that God was calling me away from music. That was hard to give up. At the same time, God had placed such a passion inside of me to disciple and mentor young leaders and I was excited about the journey.”

“I was getting married and had started a new role at a new church,” Jordan recollects, “and I really didn’t know where music fit into the mix. I knew that God was calling me to youth ministry and I wanted to give it my heart and attention. That didn’t necessarily come naturally. I remember a friend approached me and spoke out the idea that maybe the ‘music thing’ was done for me and I thought to myself…maybe this is God’s way of bringing that season and desire to a close?”

Both Jordan and James dove into full-time ministry with the intention of fully embracing where God had them, while still maintaining their friendship.

“We started to connect for accountability purposes,” James says. “We got the go ahead to meet once a week to talk about life and ministry. We would meet, process what God was teaching us and share about the joys, hardships and life-changing stories within our ministries. These experiences soon began to inspire new songs. Songs about hope in the midst of life’s toughest times and songs that celebrate who God is through those times.

It was here that The Color came to life. God brought things full circle. What Jordan and James both thought was a calling away from music turned out to be a time of preparation for a ministry in music. “It’s amazing how half a decade of learning to serve and love people will change you,” Jordan points out.

The guys decided to make a record with the songs they had written and, with a desire to begin spreading the music and cover their costs, they put a band together and hit the road.

Enter Larry Abrams on lead guitar and Tyson Unrau on the drums.

“God has been so faithful in bringing the right people to be a part of the team, at the right time.” explains James. “Larry began right from the start of our touring and when Tyson joined us, a little later, it felt like God was putting the final pieces together.”

It doesn’t take long to recognize that The Color brings an energy and authenticity, both with their music and personalities, that quickly draws people in.

“The thought behind the name ‘The Color’ comes from the idea that color brings life to the world around us.” Larry shares. “That is what we want to do with our lives and music. We want to bring life and a message of hope that we know can only be found in Jesus Christ.”

With this desire at the core of each song, concert and connect, the band has been able build a sustainable touring schedule in Canada, which is no small feat.

The Color has been awarded multiple Canadian GMA awards and has spent the last few years touring their home country, full-time, from Coast to Coast. They have shared the stage with many great artists such as For King & Country, Tenth Avenue North, Jamie Grace, Kutless and they most recently toured across Canada with Grammy-nominated Building 429.

One of the band’s biggest offstage highlights was having the opportunity to sing background vocals on a recent Michael W. Smith single, ‘He Will Never End (From “The Passion: New Orleans”). Larry shares that while they were in Nashville writing and recording with producer Seth Mosley (For King & Country, Newsboys, Unspoken), Seth was also working on a single with Michael. The Color was recording at the infamous ‘Castle Recording Studios’.

“It was an incredibly surreal experience,” Larry recalls, “to not only sing on a Michael W. Smith song, but to also have him in the room co-producing the track with Seth. We grew up on his stuff and he is a legend. He was gracious, encouraging and it was a once-in-a-lifetime experience”