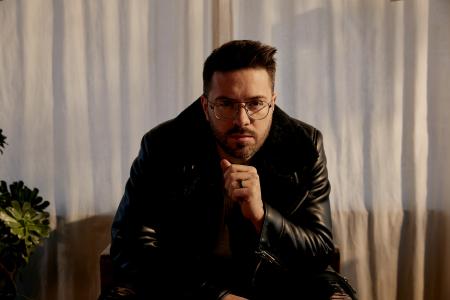 Danny Gokey does not have any upcoming events.

America watched closely as Danny Gokey battled tragedy and won millions of hearts on his way to the finals of American Idol Season 8.  His story was no secret: a onetime truck driver from Milwaukee, he’d married his high school sweetheart Sophia only to lose her, a victim of surgery gone bad, just a month before auditioning for the smash hit talent show.

That was enough to transfix viewers week after week. Add to that his singing — expressive, soulful, driven but yet in command of emotions that would have overpowered practically anyone else. The result was a performance that moved audiences to tears and inspired many to face adversity with greater courage.

Today Danny Gokey stands at a different place, wiser, stronger. He’s married and has become a father. Once paled by clouds, his world now bathes in a brighter light — the same light that illuminates his extraordinary new album.

On Rise, Gokey refocuses. No longer is he fighting to get through round after round for Idol without succumbing to grief. Now, his passion is to touch people who like him have suffered moments of hopelessness. His mission is far from over, but what he achieves through his music, as an artist and a messenger, is another step towards this.

“I wanted to share my journey through the music on this album,” Gokey explains. “I have a story to tell to which I hope others will relate and I’ve realized that I have this gift of music through which to tell it. On Rise, I feel like I’ve really figured out how to connect my message with the music.”

Supported by a team of talented producers and players, Gokey pushes far past the musical and lyrical identity of his debut album, My Best Days. Perceived initially as a country artist and nominated as Best New/Breakthrough Artist at the American Country Awards, he has since broadened his sound to match a more inclusive message.

That chain of experiences stretches back to Gokey’s upbringing in Milwaukee. He was born to sing, though it took a while for him to realize that. “Singing was what my family did but we really couldn’t tell whether our voices were any good,” he remembers, smiling. “I remember that when we had snow days and the schools were closed, my father would order pizza, put on his Motown albums and we’d all dance and sing to the songs he and my mom dated to. That’s where I got my soulful roots, from listening to the Chi-Lites, to the Temptations, to Earth, Wind and Fire.”

The first inkling that there was something exceptional about Danny’s voice came when he was 12 years old. “We went to Noah’s Ark, this water park in the Wisconsin Dells. There was this karaoke place there, and I got up and sang ‘Tutti Frutti” by Little Richard. The tent filled with people, who started high-fiving me. I guess they weren’t ready to hear this scrawny kid, maybe 70 pounds, who already had this grit in his voice.”

Even when he understood that he had a gift for song, Danny never thought much about performing professionally beyond maybe being a backup singer. That changed after he married Sophia. He earned his living driving a semi truck in those days, spending up to 80 hours a week on the road. “Once, after I got home, she asked me to watch American Idol with her. I got hooked!  I said to her, ‘We’re trying out for the show.’

“Little did I know that a month before my audition, Sophia would pass,” he continues. “People asked me, ‘Why would you do that right after you wife passed away?’ Believe me, i didn’t want to. I had to drag myself out of bed to do it. But I’d promised her I would. And it helped bring me out of that darkness. I dealt with anger and bitterness and not wanting to live. But this helped bring me out of it. When I went on the show people connected with my story.  I think that they found hope in it. That changed everything.”

From that point, Gokey gradually found empowerment through music, through his faith and through knowing that he was making a positive impact on people’s lives. In the wake of My Best Days he built his following on tours with Sugarland and Taylor Swift, through his memoir Hope in Front of Me and in 2014 with release of his next album, also titled Hope in Front of Me.

That project positioned Gokey to put all his energy and talent into this new release. Work began in January 2016, when he sat down with co-writers and the rest of his crew. “Rise started with a question: What do I want to say? Then, how do I want to say it? First, you want to meet people where they’re at. You can’t come out of the gate with something that’s way too positive. You need to meet them in a real place and show them there can be more in their lives. I think that’s what we did.”

With that clarity, the songs of Rise came quickly and with surprising ease; so did his selection of songs by other writers that complemented his own. With guest vocalists Kierra Sheard and Jordin Sparks or on his own, in settings intimate (“Chasing”) and majestic (“Masterpiece”), whether elated by romantic love (“Symptoms”) or something even greater (“What Love Can Do”), Gokey smashes past genre barriers and reaches the goal he had set for this milestone achievement.

That purpose for him, and for all who open themselves to Danny Gokey, is, simply, to rise.