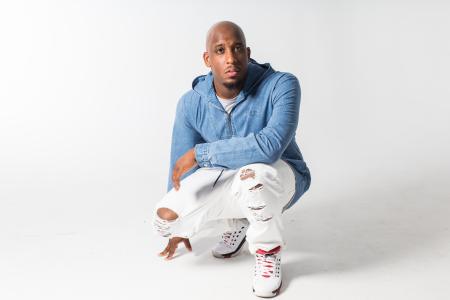 Derek Minor does not have any upcoming events.

Christian rapper Derek Minor, born Derek Johnson, Jr. in Pontiac, Michigan, moved at a young age with his mother to Tennessee. Although he wasn't close to his father, a childhood summertime visit -- during which he started rapping, assisted by beats made by his father -- fostered his involvement with music. Johnson attended Middle Tennessee State University and graduated with a degree in recording industry management. From 2006 through 2008, the budding rapper and producer, known then as PRo, released a handful of mixtapes.

He also issued the album Black Out through his Reflection Music Group label, but he considers the early 2010 mixtape PSA his first set of mature Christian rap. The album Redemption, released that July, peaked at number eight on Billboard's gospel chart. In August 2011, he released his second album, a conceptual set titled Dying to Live. It reached number two on the gospel chart but topped the Christian chart. After switching his performing name from PRo to Derek Minor, he released Minorville in September 2013. The rapper/producer has also recorded with 116 Clique and R.M.G., and has produced for the likes of Tedashii and J-Son.

After signing with Entertainment One Records in 2014, he released his debut for the label the following year. Empire peaked at number 54 on the Billboard 200. In 2016 Minor released his sixth LP, Reflection, along with 1014, a bonus EP for fans. ~ credit Andy Kellman, iTunes