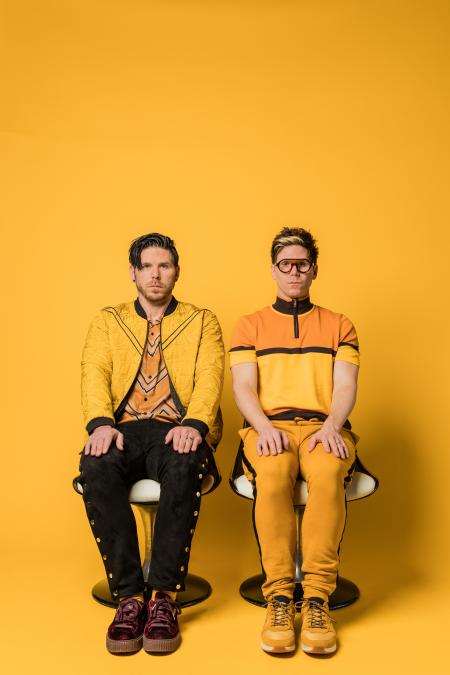 FF5 does not have any upcoming events.

FF5 is the brainchild of twin brothers Jacob and Joshua Olds: two Atlanta-bred musicians with wildly divergent sensibilities and a shared passion for shattering boundaries. Although the Nashville-based duo have endured much upheaval over the years—label drama, lineup changes—FF5 now return with new music that proves their chemistry to be more potent than ever.

Built on powerful melody and brilliantly sculpted beats, new song “Fire on the Highway” redefines the possibilities of pop and shows the strange synergy at the heart of FF5. With its shimmering textures, the song draws from Jacob’s affection for ’80s pop and Joshua’s raw rock-and-roll energy to dream up a hypnotic yet hook-driven sound. Like most of their new material, the synth-laced track was shaped by the band’s belief in following through on the beautiful mistakes that so often occur in the creative process. As Jacob explains, “Fire on the Highway” came to life while FF5 were loitering a casino parking lot in Reno, crafting some distorted vocal samples with the help of a MIDI controller. “We were messing around with this sample and the song just went off into a totally different place that made it so much stronger,” he says, noting that the track was partly inspired by ’80s dance-pop duo Nu Shooz. “That’s one of the coolest things about us having vastly different ideas and personalities—when we work together, things end up going into these exciting directions we’d never get to on our own.”

Born into a musical family (Dad was a jazz vocalist, Mom was an opera singer), Jacob and Joshua grew up steeped in Atlanta’s eclectic music culture—skating to Southern hip-hop at the local roller rink, attending an annual breakdancing competition called Breaklanta—and formed their first band in their early teens. Once they’d sharpened their musical chops and developed their stage presence, Jacob and Joshua founded FF5 with their older brother and began to carve out their singular sound. “We started melting rock-and-roll and hip-hop and dance music together in a way that was very anarchy-like,” says Jacob. “That fusion of all these different styles became the thing that we lived by—our thinking was, ‘We don’t care if you like us or not, we are who we are, and it’s who we’re meant to be.’” As they honed their sound, FF5 scored a residency at Atlanta’s 10 High Club and soon earned the attention of noted A&R exec Jim Barber.

“We played every Tuesday to mostly just the bartender and our girlfriends, but this one dude came out to see us every time,” says Joshua. After teaming up with Barber, FF5 landed a record deal with a label under Warner Music Group—only to see that label collapse just weeks after the release of FF5’s debut album. “We got folded into the Warner Bros. system where we didn’t have any champions, and the album just kind of sat around,” says Joshua. Rather than relying on the label for support, FF5 booked their own five-month tour and hugely expanded their fanbase on the strength of their unstoppable live show. “We’d sold 180,000 units on our own, basically out of the trunk of our cars, so the label came chasing after us to try to re-sign the band,” says Joshua. “We sat down with the same exact team that had told us they were going to take our first record to the moon, and in the end we said ‘Thanks but no thanks’ and decide to conquer the world on our own.” After launching their own label (through a distribution deal with EMI), FF5 released their second full-length and forged ahead with their relentless touring.

With each stage production designed to deliver a live experience like no other, their shows have included 20-foot-tall light towers flashing every color of the rainbow, onstage trampolines, life-size drum machines, band members crowd-surfing inside a giant plastic bubble, and the most inspired synchronized dancing since Sheila E. in Krush Groove. “We want to make sure that every time you see us you get something different, and you never know who might show up,” says Joshua, pointing out that past performances have included surprise appearances by artists like Kesha and Demi Lovato. As their momentum continued to build, FF5 suffered a major shakeup when their older brother left the band. “That was a hard time for me and Jake because we’d put so much of our life into this, and we wanted to keep going with this bond we’d formed,” says Joshua. Instead of calling it quits, the two remaining brothers rearranged the lineup so that Jacob (formerly the drummer) took over as frontman. “That really changed our sound, where we segued out of the more hard-rock stuff and went further into a poppy, funky, Prince-like direction that made sense for Jacob’s voice,” says Joshua. “It turned out to be a best-of-both-worlds scenario, and drove home the idea that it’s okay to do something completely new instead of constraining ourselves to any one area.”

Delivered in Jacob’s soulful vocals, “Fire on the Highway” perfectly embodies FF5’s joie de vivre. “The song’s about when you first get your license and finally have that freedom to go out and drive all night long,” says Jacob. “It’s about being carefree and living in the moment, rolling down the windows and blasting your favorite music.” For FF5, that devotion to freedom informs every element of their artistic output, especially their outrageous stage show. “We’re trying to create an experience where people feel okay with being themselves,” says Jacob. “Plenty of people in my life have told me what I should or shouldn’t wear, but at the end of the day I was okay with putting on platform shoes or dyeing my hair pink, because it felt like a great reflection of me at the time. I want everyone in our audience to feel empowered in the same way.” But for all its joyful chaos, FF5’s live set ultimately serves an even deeper purpose. “Growing up, I’d go to shows to get away from my own problems for a while, and just lose myself in something I absolutely loved,” says Joshua. “That’s what we want to do for the people who come to see us: give them an hour or two when they can get lost in the music and forget about everything else, and know that we’re all in this together.”