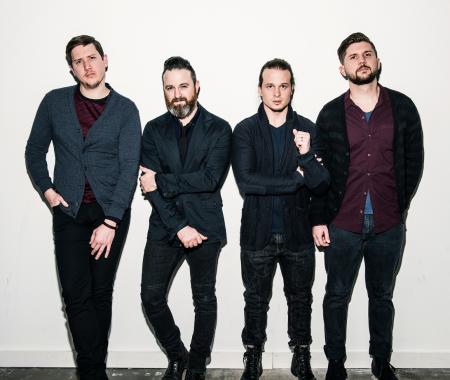 Finding Favour does not have any upcoming events.

There is a time for everything – moments of pure joy, seasons of crushing heartbreak and of renewed hope. These instances help weave together a person’s story and the beauty of making every second count. The art of capturing these precious, fleeting moments is a rare feat, yet new band Finding Favour somehow makes it look easy. With enough stories to compact into several albums, the journey to Finding Favour’s debut self-titled release has seen its share of unexpected turns and detours. But the band looks forward, excited of their new season. After all, timing can be everything.

Band member Allen Dukes recalls, “Finding Favour was at the point where we had been passed on by every label. We went through a stagnant period where nothing was happening. Touring was slow, buzz about our band was at a halt, and overall band moral was low. But, we knew God had a plan and that we would pursue His heart and His perfect will.”

The band had been searching for quite some time for record deals around Nashville, writing songs and setting up meetings, with little breakthrough. It was starting to seem like Finding Favour’s run was at its end before it had even truly begun. But in a surprising turn, fate stepped in.

Lead singer Blake NeeSmith was in the studio with producer Christopher Stevens writing what would become their debut single, “Slip On By.” "This guy walked in, looking pretty familiar,” says Blake. “He introduced himself to me and said, 'Hi, my name is Toby.'" Brief introductions and small talk turned towards music, prompting Toby to hear the song they had been working on.

"Eventually we caved into peer pressure and we played him this song," Blake says. "Immediately after we finished, he said, 'I'd love for you guys to be a part of Gotee Records.'”

“Once in a while you hear a special song that immediately takes you somewhere,” recalls Toby McKeehan, Gotee Records co-founder and president. “It causes you to think and feel and without preaching at you, it reminds you of the things that really matter. Finding Favour’s ‘Slip On By’ is one of those songs. It grabbed my heart and stirred some emotion in me that made me want to live differently.”

Leading the way is the emotionally powerful debut single “Slip On By,” which couldn’t have been a more fitting bridge to pave the way to Finding Favour’s major debut. Written by Blake and producer, Stevens, the song was inspired by a moving conversation he had with his grandfather during a fishing trip. Blake recalls, "I could tell something was bothering my grandpa. He looked up with tears in his eyes and said, 'Son, I lost my wife when she was only 53. I lost my son at a young age and there are so many things I wish I could do differently. The truth is, I can't do anything about it now. What I can do is tell you love your wife and your family because we're not promised tomorrow. We're not even promised our next breath. What we have is right now.'"

First-hand recipients of God’s perfect timing, Finding Favour hopes to relay honest vulnerability in their songwriting, bringing energy, passion and uplifting messages in their music. “I received an email from a man who said that he had decided he was done with his family,” says Blake. “He packed his bags, threw them in the back of his truck and left, saying that he didn’t care if he ever saw them again. He turned on the radio as he was driving away and ‘Slip On By’ was playing. The song spoke so deeply to him that he turned his truck around. He said it reminded him that he wanted to stay and fight for his life, to fight for his family.”

The history of their craft begins in Vidalia, Georgia where childhood friends Blake and Allen were raised on traditional family values, leading worship at local youth group services and delivering their testimony through music. "We were trying to figure out what kind of band we wanted, what kind of songs we wanted, and figure out what we wanted our message to be,” says Blake. “We feel like God was continually speaking to us, saying, 'Don't worry about being cool. Just write songs that minister to my people.' "

Finding Favour grew in 2006 when Dustin returned to Georgia following a 13-year missionary assignment in Chile South America. Dustin says, “When I moved back to the States I didn’t really know anyone, so it was a bit of a transition for me being gone for so long. But that’s the cool thing about how intentional God has been in our lives, I randomly ran into an old friend who introduced me to Blake and we all started playing together. It was obvious this was exactly where I was suppose to be.” Dustin's contacts south of the border also gave Finding Favour the opportunity to take their music outside the U.S., playing shows and ministering in Chile, Guatemala and in the Dominican Republic. When they eventually decided to relocate the band to Nashville they met Josh, a pastor’s son from Texas who moved to town to pursue a career and music through a mutual friend, and thus completing the band’s lineup.

These series of life-altering snapshots that have brought Finding Favour into the present is nothing short of a beautifully crafted timeline that unveiled better than each member could have hoped or planned for. Each singular moment leading into their debut project has helped fuel the passion behind this south Georgia-based group, who hopes that their inspiration and stories will encourage the masses.

“Our songs are a reflection of specific moments of our lives and a reminder that God has been there by our sides,” says Josh. “We hope that our music gives people hope and encourage all of us to rise as believers and love others passionately through Jesus.”