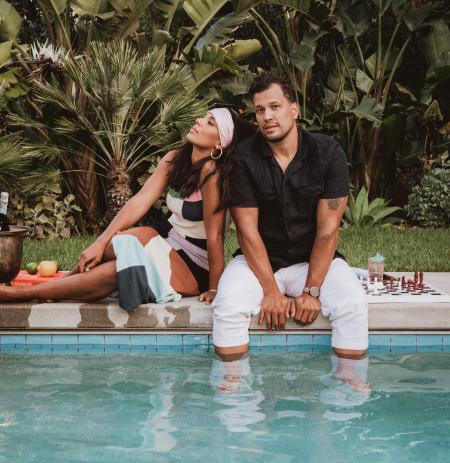 As a unit, they face life’s ups, downs, highs, lows, trials, tribulations, tragedies, triumphs, and everything in between. They change, learn, and grow as one. However, Los Angeles band JOHNNYSWIM doesn’t just seem like a family; it is a family. At the core, husband-and-wife—Abner Ramirez and Amanda Sudano—translate the memories, moments, and milestones on their journey into spirited, slick, and soulful anthems steeped in singer-songwriter tradition, yet amplified by alternative experimentation, rock energy, and pop ambition.

The music moves as the couple’s life does, scrapbooking unforgettable experiences in melody like an eternal keepsake of their relationship.

“The music is the backdrop on which our life gets painted,” affirms Abner. “We’re not just writing partners; we’re partners. There’s no balance between work and romance. It’s all a gumbo. Our first excuse to date and hang out was writing together. We say things better in song than we discuss them in person. We’ve seen terrible things, brilliant things, and beautiful things as a couple. The albums and performances become the canvas that loss, gain, romance, and love are subconsciously painted—unbeknownst to us, honestly.”

“I add intimacy, and he adds fire,” exclaims Amanda. “It’s important to have both. That’s really the balance of what JOHNNYSWIM is.”

Like any lasting relationship (whether musical or romantic), that balance didn’t crystallize overnight either...

As the story goes, Abner felt love-at-first sight upon seeing Amanda. Immediately, he thought, “That’s the girl I’m going to marry.” The only problem was he declared it aloud in front of his date (who promptly became his last ex). To add insult to injury, Amanda shrugged him off with an eye-roll as well. Four years passed until their paths crossed again at a 2005 Nashville writing session. The relationship experienced its makeups and breakups before they married in 2009—a year removed from the arrival of their self-titled debut EP, JOHNNYSWIM.

Building a fanbase through constant touring, 2013’s Heart Beats EP spawned “Don’t Let It Get You Down,” which clocked 17 million-plus Spotify streams. Their first full-length, Diamonds, arrived in 2014 as its single “Home” famously became the theme to HGTV hit Fixer Upper. The 2016 follow-up Georgica Pond yielded another fan favorite “First Try” as the duo sold out dates around the world. Along the way, they garnered acclaim from Rolling Stone, NPR, The New York Times, Huffington Post, Nylon, Du Jour, and VH1 in addition to performing on The Today Show, CONAN, and more.