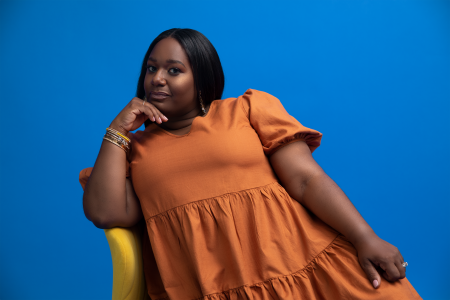 Naomi Raine does not have any upcoming events.

Armed with her melodious voice, guitar, and pen, Naomi Raine is on a mission to spread the love of God through song. Singing since the age of seven, Naomi has always found it easiest to communicate the intricacies of life through lyrics and melodies. Her strong desire to see the body of Christ united an operating in power fuels her relentless drive to make music that penetrates the heart, and inspires a thirst to worship God in Spirit and in truth. This is evident in her previous release: 2015's Heart Songs Vol. 1: My Heart, and Heart Songs Vol. 2: Adoration released in 2017.

Her 2017 sophomore project, "Heart Songs Vol2: Adoration" premiered at #10 on the iTunes Christian & Gospel charts, and at #17 on the Billboard Gospel album sales chart; an impressive feat fo an indie artist.

Her viral song 'Pour Me Out' became the anthem for a generation who desire to live a surrounded life. 'Pour Me Out' was also featured on Todd Dulaney's 2018 Your Great Name album with Naomi serving as a featured vocalist on the "We Surrender It All" reprise. Now signed to indie label "The Bridge Collective," created by Naomi in partnership with producer Gary Coach; Naomi's July 2018 live recording titled "Back to Eden" is set to be released Fall 2018

She's a wife, mother and artist, but her favorite title is: child of God.