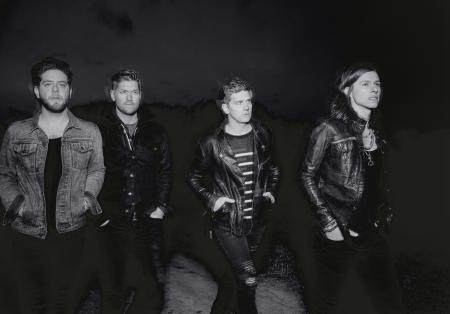 NEEDTOBREATHE does not have any upcoming events.

Named after acclaimed University of Alabama football coach Paul "Bear" Bryant, brothers Bear and Bryant "Bo" Rinehart were born and raised in rural Possum Kingdom, South Carolina, where their pastor father ran a church camp. After moving to nearby Seneca, the two siblings were exposed to a variety of music and started playing instruments themselves. While enrolled at Furman University several years later, Bear — besides being an excellent wide receiver (he won the 2002 Banks McFadden trophy for South Carolina's football player of the year) — moonlighted as a vocalist, guitarist, and pianist, even finding time to perform around campus with longtime friend and drummer Joe Stillwell. Meanwhile, Bo studied architecture at Clemson while playing guitar in his spare time, and he and bassist Seth Bolt joined the Bear/Stillwell duo to form NEEDTOBREATHE.

Seth Bolt had received a degree in recording engineering, and the band honed its sound while recording several EPs at Bolt's own Plantation Studios. A strenuous tour of the U.S. Southeast and Midwest followed. The hard work paid off when NEEDTOBREATHE came to the attention of Atlantic/Lava Records, who signed the band in 2005. A debut full-length album, Daylight (the cover of which was painted by Bo), arrived one year later, having been recorded at the British Heliocentric Studios with Keane's producer, Andy Green. Tours with Train, Collective Soul, and Will Hoge kept the guys busy throughout the year, and they returned to the studio in December to begin work on their follow-up. The Heat was released in August 2007, and helped establish the band as one of Christian rock's most successful newcomers, spawning several singles and earning two Dove Award nominations.

The Outsiders followed in 2009, boasting an epic sound reminiscent of U2 and the Fray. The album also highlighted NEEDTOBREATHE's love for Southern rock, leading to a string of strong singles that helped The Outsiders fare well with Christian audiences (resulting in the receipt of three Dove Awards in 2010) and secular listeners (who helped push the album to number 20 on the Billboard charts). The band's heavy tour ethic helped, too, and the group wound up staying on the road for two straight years, playing festivals like Bonnaroo before opening a series of North American stadium shows for Taylor Swift. Meanwhile, they continued writing new material, much of which wound up on 2011's The Reckoning.