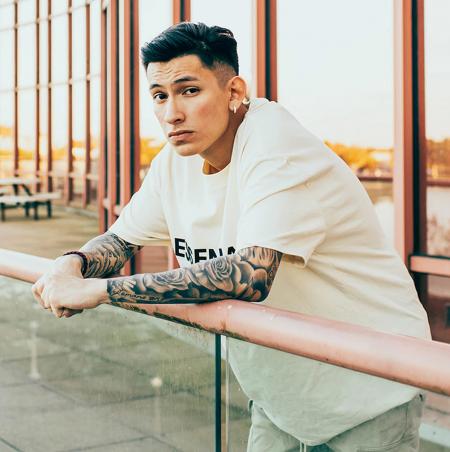 Sam Rivera is a singer/songwriter based in Portland OR. Born in Portland to Salvadoran immigrants, Sam is the youngest of 4 siblings. He began singing at age 15 at the church his parents have been pastors for 20 years. Sam says, “I avoided opportunities to sing at church. I hadn’t experienced life and felt I had nothing to share.” This led to having problems with his faith and started to stray away from church. Sam became angry, confused, experienced anxiety and fell into a depression that led him to almost end his life twice. He was cutting himself behind everyone’s back just trying to find a way to cope.

At one of his lowest points when he was about to end his life, he saw a piano, sat down and began singing worship songs. That experience turned his life around and music became a place where he could escape and express his emotions- joy, pain and fear. At 18 he began writing songs where he could communicate his feelings in a way he wasn’t able to before.

He began recording and releasing covers on YouTube and at the beginning of 2020 he released a bilingual version of Todo Va Estar Bien that currently has 2.7 million views on YouTube. Within 2 hours of the upload he got the attention of Evan Craft, one of the songwriters and performers of the song and began to form a friendship.

He has gone on to write and feature on songs with Evan Craft, GAWVI and others. Sam hopes his listeners that are lost or losing their faith will find hope and reconnect or discover their faith in Christ.