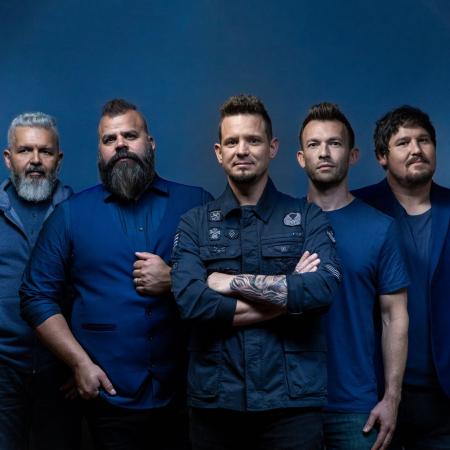 Unspoken does not have any upcoming events.

When you ask the guys in Unspoken what it is that their audiences most connect with, they’ll bring it down to a single word. But it’s not a word born of the smooth, soul-edged pop sound they’ve built of skilled musicianship, adventurous production and complex vocal harmonies. It’s also not something directly rooted in the international influences of the band (guitarist Mike Gomez hails from Dominican Republic and drummer Ariel Munoz from Puerto Rico). It isn’t even a quality anchored in the success of their first Centricity Music album which sold more than 100,000 copies, spawning four top ten singles and a number one as well. And it’s not a byproduct of their recent success as a headlining act, or their pick for a slot (alongside David Crowder and Steven Curtis Chapman) on the 2016 K-Love Christmas Tour.

The strong bond that seems to turn Unspoken listeners into fans as it turns out, isn’t about the music alone. Instead it’s about their willingness to take the stage together night after night and to put their hearts and lives on display with a raw and engaging honesty; an honesty expressed in conversation and song. In a word, the band says, the connection they have with their audience is about transparency.

“People just relate better to somebody who has been broken and redeemed,” Mike Gomez notes, “than to someone who pretends to have it all together. What we say from the stage and what we say in our songs, they’re not stories from somebody we heard about. Our songs are written out of places we’ve been and places we are.”

With the release of Follow Through, Unspoken’s second full-length project for Centricity Music, the band seems to have found a place of new freedom to push the boundaries of their trademark sound, mixing in horns and electronic elements in fresh ways without altering the core of their musical identity. Tag-team produced by Seth Mosely (2014 SESAC Christian Songwriter of the Year), Tedd T. (For King & Country, Mute Math) and Chris Stevens (Toby Mac, Michael W. Smith), Follow Through evidences a forward leap of artistic evolution from the last record, blending hip hop, soul, pop and folk influences to tell the story of the season of life the band members have found themselves in over the last couple of years.

“These new songs came out of a different place from the last record,” Chad explains. “In the past there was so much uncertainty and struggle in our lives that was reflected in our songwriting. Now we’re writing songs that are really gratitude-driven. This new record is joyful and uplifting as opposed to being born out of the grind and the struggle. We’re just grateful for where we are now, for where God has brought us on this journey.”

“There’s a lot more praise and thanksgiving on this record,” Jon Lowry, the band’s bass player, agrees. “When we wrote the last record we were all literally living below the poverty line. We’d been doing that for years. We were leaving our families every weekend to play music and working odd jobs when we were home to try to make ends meet. Life was such an immediate struggle. But with the success of our last record, for the first time we were able to just focus on the music without having to worry about the electricity being turned off. That change in our lives as a band is an answer to prayers we’ve been praying for the last decade. We’re all in awe of what God has done, and that gratitude is present all over the record.”

The project’s first single, “Higher”, is one of the most direct expressions of that joyful gratitude. A soulful celebration that the band collaboratively wrote around an inspiring horn riff, “Higher” ends up being a very unconventional praise song.

“Through all of our ups and downs one thing has never changed,” Chad says. “God is worthy of our praise and we’re constantly going to use our talents and our platform to lift Him higher. We were a little surprised when ‘Higher’ got picked as a radio single, but we’re glad it did. Sometimes the thing you think makes something too different for pop radio—in this case the Chicago-style horn section—actually turns out to be the thing that sets it apart just enough to make people sit up and take notice.”

While much of Follow Through contains that celebrative edge, it still draws from the grittier roots of personal experience. The straight-up-pop cut “The Cure” was inspired by Chad’s firsthand knowledge of what it means to be broken and seeking a remedy. “We live in a messed up world,” he says. “I came out of the drug culture. From what I can tell it’s even worse now than it was when I was in it. We’re all looking for some kind of answers, some kind of fulfillment. That’s been the state of humanity for thousands of years. But the good news is, there’s something to fill that hunger. There’s something to heal that pain. There is a cure and it’s Jesus.”

A third standout song (and a band favorite) on the new project tells Chad’s story of personal redemption more directly. “Life In The Death Of Me” is an autobiographical, soulful, hooky, hip-hop-influenced cut that showcases the skilled musical versatilities of Unspoken.

“‘Life In The Death of Me’ tells the hard story of where Chad was,” Mike explains, “and how once he was raised out of those baptismal waters he found life in the death of everything else that he let go. That hit me so straight because I believe that is the gospel. We lose our lives to follow Christ, but in him we find real life.”

A band favorite—especially when they’re playing it live—is the down-and-dirty, forward-leaning slow-groove track, “Good To Me.” “This song was an absolute blast to create,” Jon says. “We wrote and recorded a lot of it in the back lounge of our bus while we were touring. I love the groove between the bass and the drums and I actually got to use all the music theory I studied back in college to figure out where I wanted to go with the bridge progression. For the musician in me, it’s probably the most satisfying song on the record.”

After a dozen years of hardscrabble touring, music and ministry, the members of Unspoken find themselves in this new season taking stock of where they are in light of where they’ve been and where they’d like to one day be. The title track itself, “Follow Through”, was written as a prayerful plea for the grace, strength and leading to continue the journey, and to one day get from here to there.

“We often talk about how it’s easier to start something than to finish it,” Mike says. “I think we’re all at a place of saying, ‘Lord we want to follow through with our side of the deal. We know we’re covered by grace so it’s not about earning our salvation or God’s love. It’s about how we want to be faithful to you and continue our calling. We don’t want to start something and leave it halfway.’”

“We’re happy to be in this new place in our careers,” Jon adds, “but when you finally receive something you’ve been longing for, it never quite fulfills in the way you think it will. Ultimately our satisfaction and fulfillment can only be found in surrender to Christ and we see that now more clearly than ever. Follow Through as an album and a song title expresses the desire of our hearts to make good on the commitments we’ve made to God, to our families, and to everyone else. It’s about learning to live in contentment and faithfulness in whatever situation God places us in.”

“I had felt burned out for a while,” Chad admits, “like I didn’t have anything left to give. The whole process of the last few years had just worn me down. I feel like this record is kind of a resurrection. And with the title track being “Follow Through”, the theme of finishing as strong as we did in the beginning, has emerged. We’ve found our second wind and now we’re feeling just as much passion and purpose as we did a decade ago before any of us had families, when it was just a bunch of guys traveling cross-country in a beat up Cadillac, serving people, not worrying about the money or bills or anything; just making music and doing ministry. I think this new album represents a fresh beginning for us spiritually and musically.”