The War and Treaty

Home / Artists / The War and Treaty 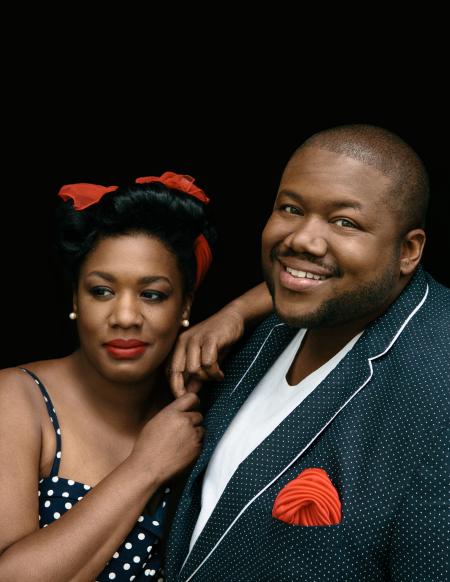 The War and Treaty does not have any upcoming events.

After winning a talent show when she was 13, Tanya knew singing would be her life. Growing up in a tight-knit community just outside of Washington, D.C., Tanya had a voice that was already hinting at the force it’d become: honeyed and bold, guttural but angelic. She’d discovered writing, too, and every blank space was an opportunity. “My mom would come into my room late at night and catch me reading books and writing, with a flashlight,” Tanya says, laughing. “I used to write on everything––envelopes, everything.”

Michael started writing later, and for different reasons. He spent part of his childhood in Cleveland before moving with his mother, brother, and sister to Washington, D.C. The family spent time in and out of homeless shelters––a limbo Michael would experience again as an adult. He was 19 when his first daughter, Michaela, was born. “She was the first thing I felt that I’d done right––my little girl,” he says. “I joined the army for her.” Michael enlisted in the United States Army in 2003, two years after 9/11. “I didn’t know it was wartime,” he says. “People say, ‘How do you not know that?’ Well, in the neighborhood I grew up in, we weren’t patriotic. No one cared––that’s rich people’s news. Meanwhile, someone I know just got shot yesterday.”

But what Michael did know was that as a soldier, he felt proud––then scared. He was sent to Iraq, where leaders who outranked him saw the fear in his eyes and treated him not as an underling, but as a brother. Stationed in one of Saddam Hussein’s rubbled palaces, he had access to a piano that had emerged miraculously unscathed. A captain heard him play and sing with his once-in-a-generation volcano of a voice, and he encouraged Michael to pursue music. When that same captain was killed, Michael sat down to write––really write––for the first time.

Officers noticed the tribute, pulled Michael from the front lines, and gave him a new charge: write and perform songs for the fallen. So whenever a brother or sister in arms died, Michael spoke to buddies, uncovered the story, and penned a song for the memorial. It was a heavy burden that also made him safer. “I remember, I would walk from one point to another, imagining people were chanting my name––imagining a concert that had nothing to do with death,” he says.

When Michael returned home, he was booked on a festival that also featured Tanya Blount. After his set, Tanya approached him and asked if he’d written his songs. He had. The two exchanged numbers, but Michael, battle-weary, scarred, and daunted by Tanya’s beauty, couldn’t understand why she’d want anything to do with him. “I threw her number away because I had a lot of insecurities that I still have. I thought, ‘Who would want to be with a guy who went to war?’”

Tanya didn’t wait on him. She called Michael, and the two became inseparable. Today, they’re married and have created a six-year-old son and a powerhouse duo. When The War and Treaty stepped up to fill an ill Buddy Miller’s spot at the 2017 Americana Music Festival & Conference, jaws at the Cannery Ballroom in Nashville collectively dropped. Just as anticipation surrounding Healing Tide is more than high, the music on the record is more than just sublime roots soul. It’s part of a mission.

As The War and Treaty, Michael and Tanya serve up healing and pain robbing with freewheeling joy on a monumental new full-length album, Healing Tide. An original tour-de-force produced by Buddy Miller, the collection swaggers with a confidence only gained by artists who are wholly, proudly, themselves. Funky bass lines, keys, lap steel, acoustic strings, and stripped-down percussion create a swampy Southern soul bed for the couple’s transcendent vocals. “I hope people see our hearts on this record,” Michael says. “I want them to experience freedom. To feel again.”

Michael wrote every track on Healing Tide alone. Opener “Love Like There’s No Tomorrow” sets the tone both thematically and vocally. Stark tambourine gives way to Michael’s gravelly locomotive vocals, which are joined in an early chorus by Tanya’s soaring harmonies. “Today is all that matters,” Michael says. “I would say that The War and Treaty’s mission is to embrace the now.”

Tanya takes over in “Are You Ready to Love Me,” as an old-school groove propelled by bass, electric guitar, and pedal steel growls. With unblinking confidence, Tanya asks the question too many women are too afraid to muster. “It puts us, as women, in a position of strength,” Tanya says. “A lot of women endure unnecessary pain because the question wasn’t asked or answered. I always say, let’s jump off the bridge together, hand in hand. You got to be in love to hit the water at the same time.”

Featuring a divine cameo from Emmylou Harris, “Here is Where the Loving is At” offers a moving portrait of loyal femininity and grace. Sweet but frank, “One and the Same” shuffles through a message of unity and recognition of ourselves in others who don’t look or sound like we do. Over crying steel, “It’s Not Over Yet” extends empathy and an outstretched hand to those losing faith.

Both Tanya and Michael admit to having favorites. “Little New Bern” hits hard for Tanya, painting vivid pictures of her grandparents’ farm. “That’s where happiness started for me, at my grandparents’ every summer, barefoot in the dirt, down at the pond, playing with the frogs,” she says. “I think everybody has a Little New Bern.” Michael singles out “Jeep Cherokee Laredo,” a scorcher that tells The War and Treaty story. “It starts off with me telling my truth––I said I’d never love again, never get married again. There were so many ‘I would never do agains,’” Michael says. “Then here comes this girl, and I put my foot in my mouth. And I got to live up to it.” A thumping sing-along, the song swings and jumps with joyful shouts from both Michael and Tanya.

Another standout, the title track offers an invitation: be part of humanity’s reconciliation. Michael wrote the song first as a gauntlet thrown down not to others, but to himself. “I was confronting myself,” he says. “I thought, ‘I wonder if Dr. King ever felt like giving up. Wonder if he thought, ‘I just want to be with Coretta and the kids, whisk off into the sunset.’” Michael pauses. “He’d be alive. So how heavy is the responsibility? Are you strong enough to pick it up?”

“You have to have a deep place of love within yourself to be vulnerable,” Tanya says. “With The War and Treaty, we allow people to see two people that are not perfect. We get on stage. We sweat. We’re overweight. We yell. We get ugly, we scream! My hair comes loose. We’re vulnerable––naked––in front of people, and it’s a chain reaction. It allows them to be vulnerable, too.”

The War and Treaty deliver live shows and records that make the hairs on the back of necks stand up. Their music and stories bring tears and goosebumps, but ultimately, more is at work. In the midst of Michael and Tanya’s open, beaming faces and united voices, facades met away. Walls are torn down. “I want people to feel like we care,” Michael says. “When you think about artists, you don’t think about that.” He pauses and grins broadly. “But that’s the way I want the world to feel about The War and Treaty.”